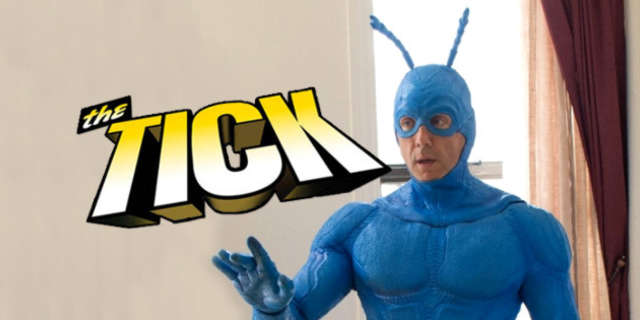 The news broke this week that Amazon is going to turn their pilot for The Tick televsion show into an ongoing series. The off-beat dark comedy series is set to premiere on Amazon Prime in 2017. The series synopsis describes the premise of the show:

“In a world where superheroes have been real for decades, an accountant with mental health issues and zero powers comes to realize his city is owned by a global super villain long-thought dead. As he struggles to uncover this conspiracy, he falls in league with a strange blue superhero.”

Ben Edlund created The Tick back in 1986. The character, who was originally created as a mascot for a comic book shop newsletter, eventually got his own series in 1988. The Tick was intended as a spoof of superhero comics and blended humor and a little touch of violence in just the right amount. The Tick would become a very popular independant comic series in a time when indie comics were thriving. Spinoffs from The Tick include Paul the Samurai and the Man-Eating Cow.

The Tick gained mainstream popularity back in 1994 when the Fox cartoon aired. The toon was accompanied by a line of action figures and even Taco Bell kids meal toys. The comedic style of the comic book translated well into animated form and the show lasted a whopping three seasons. The Tick cartoon is still regarded as a cult favorite by many children of the 1990s.

In 2003 Fox went back to the well to explore the adventures of the big blue bafoon again when they cast Patrick Warburton in the lead role for a live-action The Tick television series. The timing just wasn’t there for the show at that time, so it ended up being a rather short lived series of only nine episodes.

This new series is an interesting new chapter in the history of The Tick. I was a huge fan of the 90s cartoon series, but I’m not sold on the idea that something like The Tick works in live action. I wasn’t impressed with the pilot episode, personally, but since the series is being helmed by creator Ben Edlund, its definitely something to keep an eye on!
at October 03, 2016