Man or Monster? A Brief History of Killer Croc

Originally Written for Legions of Gotham May 2015
by Matt MacNabb


Batman has aquired a rather extensive rogues gallery over the past 76 years.   His rotating stable of villains includes everything from mass murderers, serial killers and thugs to the rejected, disfigured and often misunderstood.  Which of these categories, then, does a certain Mr. Waylon Jones, known more affectionately to fans as Killer Croc, belong in?   This character, though created over three decades ago, found his largest fanbase as a somewhat bumbling brute on Batman: The Animated Series and has appeared regularly in the comic books since that time, but how much do we as fans really know about the complex history of this character?   His inclusion in the upcoming Suicide Squad movie, alongside fellow Bat-Rogue Harley Quinn, has generated a lot of buzz around his portrayl as a disfigured man, rather than a hulking mutated monster.  This being his very first appearance on the big screen, we thought this would be a good time to take a look at the history of the man known as the Killer Croc and show some of the newer fans just how comic accurate that Suicide Squad portrayl really is. 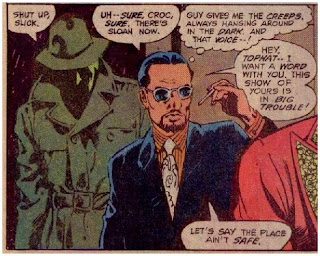 KING CROC
In a pre-Crisis universe Killer Croc made his debut in the form of a cameo that book place in Batman #357 in March of 1983.   A relative newcomer to the Batman gallery of rogues, Croc has managed to keep himself in the forefront of many important Batman tales over the past few decades.  Croc was created by Gerry Conway and Curt Swan as a new and vicious threat to the Dark Knight. 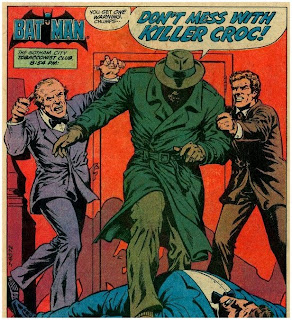 Killer Croc first appeared obscured by shadows in a trenchcoat and hat, busy delving his sticky fingrs into underworld dealings and pulling strings to get his ends met.  There was a gap left in the Gotham underworld when Rupert Thorne and Falco are both in prision, and Croc decides to step in as the new boss. 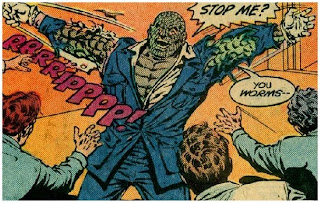 He reveals himself as a former sideshow freak from Florida that used to wrestle alligators for the crowds.  He could break their backs with his bare hands.  Once the Croc realized his strength, he decided that he should make it work for him.   Dubbing himself King Croc, he traveled to Gotham City, America's magnet for crime, and established himself as a menace. 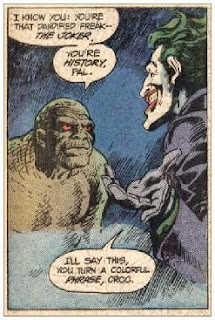 Afflicted with Epidermolytic hyperkeratosis, a real-life skin disorder that causes the clumping of keratin filaments.   Croc first appeared with a body covered in scales, and as the 1980s progressed he got a little more beast-like, whith his eyes turning red and his skin more green.  It was revealed in Detective Comics #526 in May of 1983 that King Croc killed the second Robin, Jason Todd's, parents. 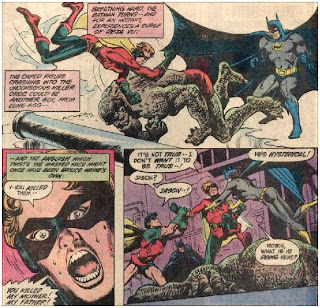 This fact was retconned later by the DC Crisis, and Two-Face was then responsible for the murders.   The Crisis was a difficult time for Croc.  He would show up here and there in the years following the Crisis, but he notably showed up during the lead-in issues to the Knightfall saga of the 1990s. 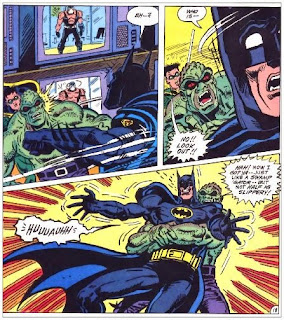 CROC IN THE 1990s
In Batman #489 (February 1993) Killer Croc takes on Batman and tries to break his back.  He fails, and ultimately has to do battle with Bane, who is working behind the scenes to establish his dominance amongst Batman's rogues gallery.  Bane breaks both of Croc's arms, and leaves  him in shambles, only to be carted back to Arkham Asylum. 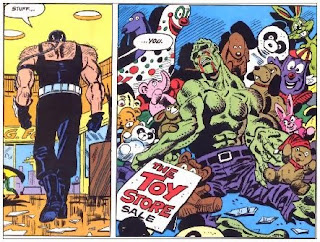 Killer Croc re-emerged as a suit-wearing gangster in Chuck Dixon's acclaimed Robin series in the early 1990s.  The dichotomy of the savage beast and the coniving criminal mastermind made the earlier incarnations of Killer Croc far more interesting than the mutated brute of the past decade. 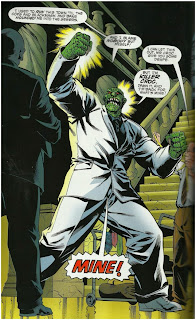 Croc was introduced to a whole new audience of young people when he made his very first appearance in cartoon form in Batman: The Animated Series.   He would appear in five episodes of B:TAS as a strong, but rather dopey villain, not the serious and coniving threat of the 1980s.  When Batman: The Animated Series moved networks and was redesiged for Kids WB! as The New Batman Adventures, Croc would also get a rebirth for two episodes of that series.  His new, more menacing, look and attitude were a great tribute to the original incarnation of the character in the comic books. 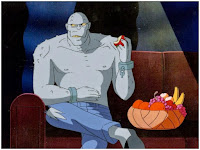 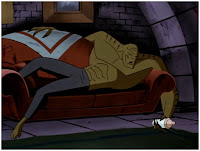 The comic book version of Croc began to de-evolve in the mid 1990s and he was called by Swamp Thing to rejoin nature in the swamps.  Batman wasn't too pleased with this idea, but Swamp Thing didn't give him much choice in the matter. 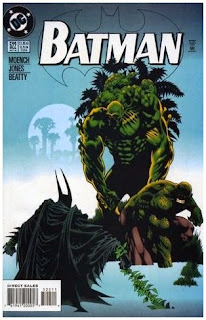 THE BEAST EMERGES!
The turn of the millenium and the introduction of the cult favorite HUSH story arc would bring us a Killer Croc that has degenerated from a disfigured thug to a mutated beast. 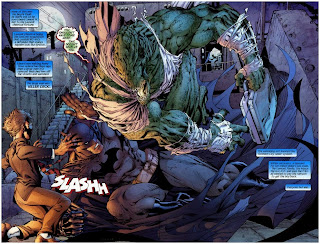 Jim Lee designed a Croc with serious teeth, a snout and tail.  This monsterous version of Croc has become a fan favorite and set the tone for versions over the next decade, including the action figures originally released by Mattel, of which Croc got his very own themed wave and the massive beast that is featured in the Arkham video game series. 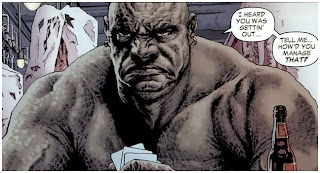 The look and feel of Croc was brought back to the old school when Brian Azzarelloand Lee Bermejo released the out of canon graphic novel "Joker", around the time of the Dark Knight film.  This version of Waylon gave us a hulking brute of a man that had some mild disfigurement and enjoyed feasting on the flesh of humans.

We get to see that Croc still has a human side in the recent New 52 reboot of the comic books.  The most recent arc to feature him portrays him as less of a mutant creature and more of a humanoid with a menacing face that resembles the Batman: The Animated Series incarnation. 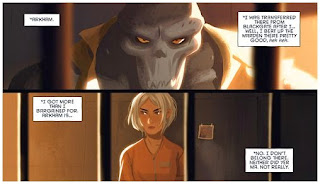 Croc has formed a meaningful relationship with a fellow Arkham inmate named Sybil.  She suffers from multiple personality disorder, but her own mental illness allows her to see past Croc's deformity and treat him like a real person for the first time in his life.  This emotional attachment clearly changes Croc.  He promises to look after Cybil's daughter Olive and in the pages of Gotham Academy this year we see him do just that.


That brings us to present day and the Suicide Squad film.  The look of this version of Croc is actually so comic accurate to the original that its fantastic.  Hopefully, he'll come armed with the brutality and attitude to match.  This new birth of a DC Cinematic Universe is introducing Killer Croc almost immediately into the mix, assuming he makes it through Suicide Squad alive, he could definitely be in solo Batman films in the future.  What do you think of Croc's look now?  Sound off in the comments and on Facebook & Twitter!
at May 20, 2015