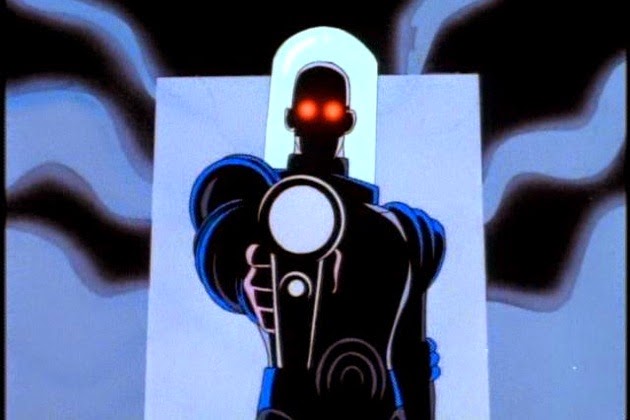 Originally written for Legions of Gotham in March2015
by Matt MacNabb

Mr. Freeze is one of the most enigmatic and emotional villains in the Batman's rogues gallery.  Orginally dubbed 'Mr. Zero' when he was first introduced to comic book fans back in 1959.  His appearances on the 1966 Batman television show altered his name forever to Mr. Freeze!   The real birth of this once one-dimensional character, however, came in the Batman cartoons.   Legions of Gotham will now countdown the top five animated appearances of the tragic Dr. Victor Fries!

5. Young Justice
The Young Justice cartoon ended too quickly after just two seasons, but Batman fans were treated to a few appearances by the king of cold before it was done!  Mr. Freeze  appeared in three episodes of the popular series, voiced by Keith Szarabajka.   This beefed up older version of Freeze was captured by Batman and Robin and transported back to Arkham Asylum, and later transfered to Belle Reve Penitentiary after being declared legally sane.   It was in prison where Freeze managed to cause more trouble by helping to organize a mass breakout.

4. Future Freeze
We got a rare animated peek into the future in the season four episode of 'The Batman', titled Artifacts.   We're transported a thousand years into the future of Gotham City and Mr. Freeze has managed to emerge and it terrorizing the citizens of the future!  The police are desperately trying to comb through the archives they can find in the old rubble of the Batcave to see how Batman last defeated his foe, since any trace of the Batman legacy is long dead.  We get a cool flashback scene to 2027 where we see Batman facing this cool future freeze.   Freeze has now been reduced to a torso with robot legs and is in a giant super-mech suit.  The voice duties are still being performed by The Batman's Clancy Brown.

3. The New Batman Adventures
When Batman: the Animated Series got its design overall to become The New Batman Adventures, one of the villains that went through the most changes was ol' Mr Freeze.   He remained voiced with the dry, emotionless delivery of Michael Ansara, but the character himself went through intense physical changes.   Mr. Freeze's condition has become too unstable, so he has resorted to being just a head under glass that has mechanical spider legs attached.   Freeze is able to climb inside of a robot body and appear somewhat normal, with enhanced strength and agility, a useful tool when facing the Bat-Family!

2. Batman Beyond Mr. Freeze
Decades in the future Mr. Freeze's head is alive and well in the laboratories of Wayne-Powers!  Derek Powers (aka Blight) has been keeping it there, having research done to cure his affliction.  A bright young scientist comes up with a procedure that helps Freeze become mobie again with a new cryogenic suit.  Mr. Freeze decides to use his powers for good, but the aged Bruce Wayne isn't buying it.  He has Batman Beyond watch over Freeze, and he soon turns back to a life of crime.  This version of Mr. Freeze was voiced again by Michael Ansara, keeping consistant throughout all three Timmverse incarnations of the character. 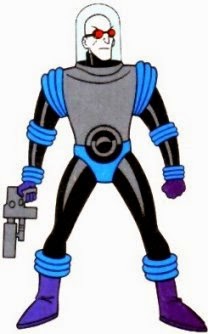 1. Batman: The Animated Series Mr. Freeze
The definitive characterization of Mr. Freeze happens in his debut Batman: The Animated Series episode, titled Heart Of Ice, for which the writers won an Emmy!    Freeze is voiced in a dry and menacing tone by the great Michael Ansara.  We had previously only seen Mr. Freeze as a one-dimensional animated character in the two Filmation Batman cartoons.  This go around they took Mr. Freeze and made him arguably he most sympathetic and emotional villain in Batman's rogues gallery.  The plight of the devoted husband, his mind twisted by the loss of his beloved wife is one that resonated deeply to the audiences of all ages.  It is unlikely that without this version of him that we'd even be discussing the character at all.  This will likely remain the definitive animated, and all around, version of Mr. Freeze.

The first time a non-Bruce Timm helmed animated Batman show hit the air since 1992 was when Jeff Matsuda's vision for the Dark Knight, called The Batman, premiered in 2004.  The progressive and unique new designs were a welcome treat to Bat-Fans young and old.  Mr. Freeze was voiced by the gravely and dark stylings of Clancy Brown, previously known to fans as the voice of Lex Luthor in the Justice League series.  The Batman ended up lasting for a five season run.
at March 13, 2015