Op-Ed: Why the Batgirl Cover Should Have Been Cancelled! 
In recent weeks a controversy has arisen in the comic book fan community over a variant cover to Batgirl #41 that pays homage to the fan-favorite 1988 Batman one-shot graphic novel, Batman: The Killing Joke. The story has been picked up by national media outlets and some comic book fans may be wondering why this cover is such a big deal. The idea that this is an issue of censorship has been thrown around, as has a huge movement by the predominantly male comic book community to pressure DC Comics into releasing the cover as scheduled. The request to not release this cover actually came directly from the artist, Rafael Albuquerque. We aren't talking about any violations of free speech or censorship here -- neither of those would qualify in this instance. We are looking at a private company that opted not to release a comic book cover that they commissioned to be created, based on sensitivity to the public. It has been incorrectly cited in the media that death threats were going around, but just to be clear, those threats were actually against those that were objecting to the cover being released. The fact that DC Comics agreed to cancel this cover is a very, very good thing...and here's why.

Consider the idea that a major mainstream entertainment company like DC Comics has a comic book that showcases sexual assault and a new comic book cover that actually pulls that part of the comic book out to glorify and tribute the incident. Nearly half of all comic book readership, over 46% in fact, is actually female. Couple that with the fact that at least one in five females has or will been sexually assaulted in their lifetime and certainly a greater number are sensitive to including excessive amounts of it in their chosen forms of entertainment. That doesn't even count he number of males that aren't fans of sexual assault as a form of enertainment and you risk alienating a large part of your audience. The Killing Joke was certainly a dark and edgy book that was released at a time when that type of content what young male comic book fans were craving. This comic book was the first mainstream exposure that many readers had to not only darker themes, but a real mingling of sexuality and violence. 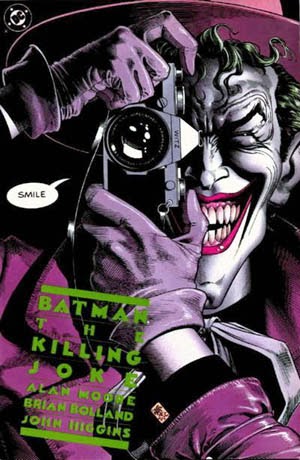 The Killing Joke spends some time giving us an origin story for the Joker, something that many fans had never been exposed to at that time. We were woven the tale of a failed, desperate comedian and his pregnant wife. He gets in too deep with some criminal types and bad things happen. This part of the story is a nod to the retro 1951 Detective Comics #168 story, "The Man Behind the Red Hood". The story goes on to show the daughter of Commissioner Gordon, and Batgirl herself, Barbara Gordon answer her door to the Clown Prince of Crime. The Joker is whimsically dressed in snazzy vacation attire, complete with a hawiian shirt, shorts that show his pasty legs and a camera around his neck. The Joker wastes no time in shooting Barbara right in the stomach, paralyzing her instantly. We are then shown the Joker undressing her in a very menacing manner and later learn that he has snapped photographs of her in some compromised state. This is where the story gets a bit fuzzy. 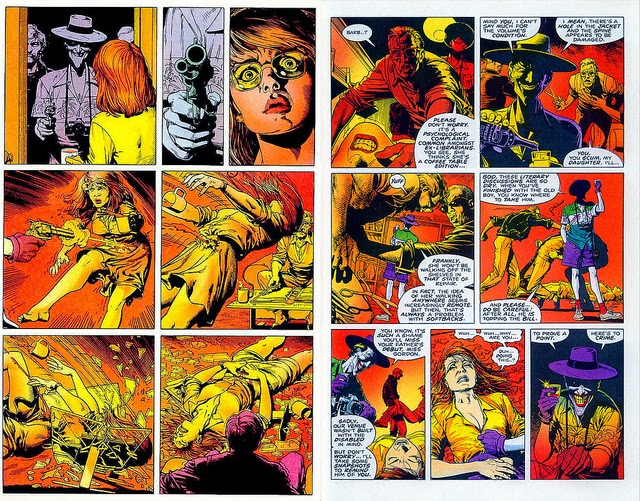 There is a lot of intense debate amongst fans about whether the Joker injures, humiliates and sexually assults Barbara or if he actually full-on rapes her. On one hand it wouldn't be beyond author Alan Moore to go all the way with this, as he did feature rape in his 1986 comic book series The Watchmen. Oh, and again in The League of Extraordinary Gentlemen (yes, the one they made the movie off of) volumes I and II AND The League of Extraordinary Gentlemen 1969, AND AGAIN in Miracle Man AND again in Lost Girls AND the near rape of Evie in V for Vendetta (yes, again the one they made a movie off of!). Alan Moore is no doubt marketable and highly sucessful as a writer, no one disputes this. His stories have a trend of taking off in the mainstream, which he often comments about loathing, but he clearly has a strong recurring theme of rape in his work.


Grant Morrison, a current big name writer at DC Comics, told Rolling Stone's Brian Hiatt in a 2011 interview that "I was reading some Alan Moore Marvelman for some reason today. I found one in the back there and I couldn't believe. I pick it up and there are fucking two rapes in it and I suddenly think how many times has somebody been raped in an Alan Moore story? And I couldn't find a single one where someone wasn't raped except for Tom Strong, which I believe was a pastiche. We know Alan Moore isn't a misogynist but fuck, he's obsessed with rape. I managed to do thirty years in comics without any rape!" Well said Grant.


There are still many comic fans that will assert that Barbara wasn't not raped, simply paralized, stripped nude, photographed and humiliated. Oh, and her father was also stripped naked by BDSM-gear sporting midgets and forced to view the photos. Well, thats a relief! I was worried that the content could somehow be misconstrued as inappropriate. The Joker isn't a typically sexualized character. The fact is that rape isn't a crime of sex, but rather one of power and control, so in that way it could fall into the Joker's character.

Batman, who has remained basically emotionless to the pain and suffering of his dear friends throughout the Killing Joke story, corners the Joker in an alleyway and beats the tar out of him. Readers are left with a bloody and battered Joker standing face to face with the Batman in the rain. The Joker tells Bats a joke and begins to laugh. Then, out of nowhere Batman himself begins to chuckle and the two share a good laugh together before the Joker is carted away again to Arkham Asylum. To say that this scene disturbing is a vast understatement. Not only is the Joker a murderer of hundreds or even thousands of innocent people prior to these events, including Robin (Jason Todd), but he goes so far as to assault Barbara and James Gordon...and the Batman shares a laugh with him? This shows that perhaps the Batman feels some sort of twisted connection to the Joker, even more so than the Gordons. Two people, their veiled personas born from misery. They know death, they know torment, but they deal with it in very different ways. This certainly isn't the way their relationship is always portrayed. I remember reading the story as a ten year old boy...looking up and thinking to myself "Oh, holy shit did the Joker just rape Batgirl?!...and Batman doesn't even care?!" I'm supposed to see this man as a hero and I'm sorry, but as a son, brother, husband, father and a man I just can't fathom this reaction. Alan Moore took the soul out of Batman

This leads me to the core of my real issue with The Killing Joke. I believe in comic books as not only an art form and amazing story telling medium, but also one that can reflect real-life issues...hopefully to teach us all something in the process. That being said, a story about key character going through something like rape would have been a wonderful chance to teach the young male readers that this wasn't a violatio that should be tolerated. We could have been taught as readers that rape was a horror and a humiliation that no person should have to endure and perhaps instill readers with some level of compassion and even an anger against sexual crimes. Unfortunately, that wasn't the moral of this story. Batman just didn't care. Bruce Wayne watched his parents gunned down before his very eyes, an act that would have torn his feeling of security away as a child. It would have taken his safety and his power, something he had to go to the lengths of becoming the Batman to get back! These same feelings can often happen to a woman when she is sexually assulated, so you'd think of all people the Batman would understand. Does Batman come to the aid of Barbara and Jim? No. Does Batman finally cross the line and end the Joker's life? No. Batman gives the Joker a fat lip and then laughs it out. Silly Joker...there he goes rapin' again! 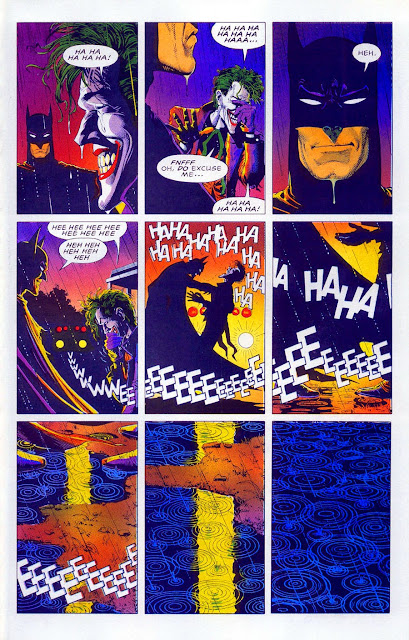 The Killing Joke was released in 1988. Whats done is done, but now this new variant Batgirl cover showcases a helpless Batgirl with the Joker painting a smile on her face in blood, while wearing his outfit from the Killing Joke. The Killing Joke is not a classic, its not a story to be revered. Its a huge festering sore on the history of Batman...a blight that should be erased, certainly not homaged. Bravo to DC Comics for reconsidering this cover. After all, when Alan Moore wanted to cripple Barbara back in the 1980s the editorial decision handed down was literally "Cripple the bitch". Hopefully moves like this will show misogynists everywhere that some of us love women, and I believe that the Batman character that I know and love does too. I would ask those that object to this move to go back and with a clear mind re-read this story and really analyze if this is the reaction you want from your Batman and if this story should still hold up as a classic amongst the fans. 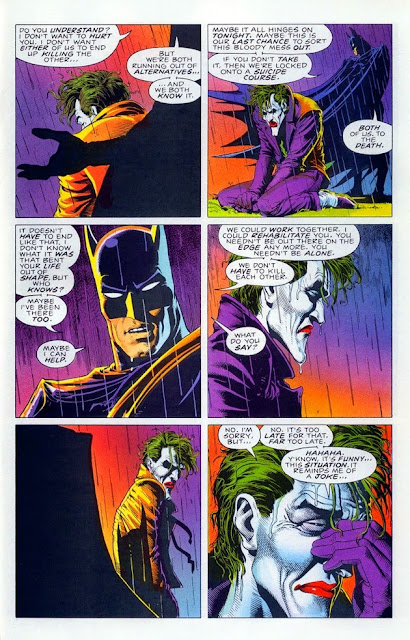